Endowed with huge magical powers, such artefacts were allotted to the initiates of the Iniet society of the Tolai of the Gazelle Peninsula in New Britain, Papua New Guinea. Each new initiate owned one.

The Iniet society is an important Tolai society which uses many different art forms to represent varied ancestor and spirit entities. Male Tolai are traditionally initiated into the Iniet society during childhood, becoming in turn the initiators when they reach adulthood. The early German colonial government and the various missionary societies actively tried to suppress the activities of the society, so that it went underground, surviving in one form or another to the present day. Traditionally, there are two major types of Iniet society practice, a positive-oriented one that brings happiness and good luck and a negative-oriented one that brings sickness and death.

Various anthropomorphic wooden figures, wooden grotesque human/animal composite figures, carved or painted boards with evil Iniet society spirit figures and carved and painted stone (such as the one here) and chalk figures (kulap), were used by the Iniet in a range of ceremonial contexts.

The use of chalk and stone figures by the Iniet society has been documented to the nineteenth century. Its geographical distribution includes the Tolai areas of the Gazelle Peninsula, the Duke of York and Mioko Islands, and southern New Ireland.

Here the human figure has upraised arms with hands showing the palms. This gesture is frequently found in varieties of carved or painted Iniet spirits, notably the power spirit entities carved on the dance wands held by young initiates. The composite human/animal forms on the wands are probably representations of personal power spirits.

From George A. Corbin, “East New Britain” in Arts of the South Seas, Island Southeast Asia, Melanesia, Polynesia, Micronesia, The Collections of the Musée Barbier-Mueller, 1998, pp. 256-267. 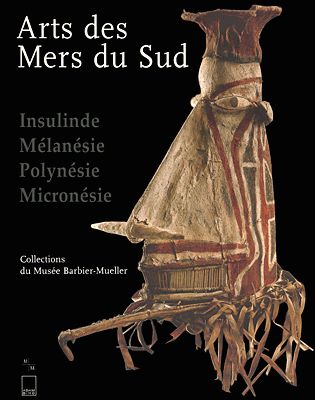