With treasures from every era and from all over the world in gold and silver, inlaid with stones or beads, in bronze or iron, ivory, wood, shells, feathers or jade, the jewellery from the Barbier-Mueller Collection interacts with the dazzlingly exuberant shapes of crystals and sparkling minerals.

The jewellery collection is an important part of the Musée Barbier-Mueller. Indeed, the Musée des Arts Décoratifs in Paris gave the ensemble pride of place when it displayed a selection of some 500 pieces in the nave of the museum in 1994. Entitled “Parure”, the exhibition in Paris was a great success and a revelation to the public. But although numerous new acquisitions have enhanced the collection and in spite of our visitors’ persistent requests, the jewellery has not been shown since. Alexis, the Museum founders, Jean Paul and Monique Barbier-Mueller’s grandson, started taking a keen interest in minerals at a very early age. Fascinated by the strangeness of certain specimens and their sumptuous colours, he now possesses a collection of ‘jewels of the earth’ combining beauty and rarity. Presented here for the first time, these minerals are brought face to face with the ethnic jewellery of the Musée Barbier-Mueller Collection, made from raw materials, shells and semi-precious stones. At the heart of this selection many of the ornaments are indeed true miniature sculptures like the tiny bronze figures worn by African peoples as pendants. These jewels tell us their story and are an integral part of the culture and way of thinking of the peoples who created them. With their silky, vitreous, pearly sheen, waxy or metallic, the striking multi-coloured mineral forms are placed all around the exhibition to interact with the jewellery. We should point out that this selection from Alexis Barbier-Mueller’s collection was not designed to present the rarest, but rather to highlight its most spectacular pieces. It is also interesting to note that the exhibition and its fine catalogue bring together a large number of pieces that belonged to Josef Mueller, founder of the family collection in 1907, with those collected by a representative of the fourth generation – a hundred years later. 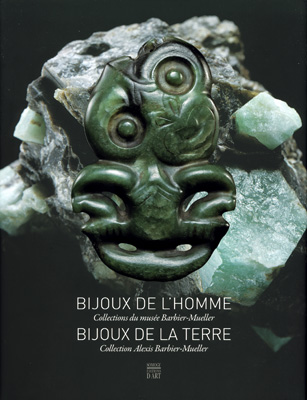