This crouching figure, whose neck is adorned with pearls and ankles with metal rings, was carved by the Luluwa people of Democratic Republic of Congo. The head is hollowed out to serve as the receptacle for tobacco, hemp and other magical ingredients to be stamped or grinded with a now missing pestle. Such ingredients were inhaled or smoked as part of the healing process or the divination practices. Smoking hemp was a favoured way to get closer to the spirits world.

Several interpretations exist for the typical and striking crouching or squatting form of the Luluwa caryatids.

Some have proposed that it represents a chief or a high-ranking male who is pondering his duties and responsibilities. Others have associated it with a hunting ritual during which the hunter was crouching in front of a figure in the same position and blew smoke onto the sculpture in order to activate its inherent powers and thus ensure a successful hunt. It is not a coincidence that some freestanding squatting Luluwa figures, like the following example in the Musée Barbier-Mueller, which has the small horn of a duiker inserted in the top of its head, have been identified as hunting charms. It was used to prepare the tobacco which was then smoked in a pipe.

Crouching with the elbows placed on the knees and the hands holding the head is a common way of resting in societies where stools or chairs were not widely available or used. It may also allude to illness and pain or even to remorse and sorrow. Amont the neighbouring Chokwe, crouching figures typically represent an ancestor who laments being neglected by his descendants.

The most striking feature of the mortar is the depiction of a large erect penis. In the arts of some African cultures, an exaggerated phallus is used for humour or mockery. In the contexte of such Luluwa sculptures, it could also refer to the sexual and reproductive powers of their high-ranking owners. It is well-known that leaders in many Africa societies are considered to be responsible for the fertility of the land and people over which they rule. However, perhaps, the enlarged rendering of the penis specifically relates to erectile dysfunction or some other sexual problem which power objects like the Barbier-Mueller mortar were meant to remedy?

Dr Constantine Petridis dedicated the article “Is it a Mortar or Is it a Charm? A Luluwa Carytid Container” in Arts & Cultures 2009, pp. 124-137. 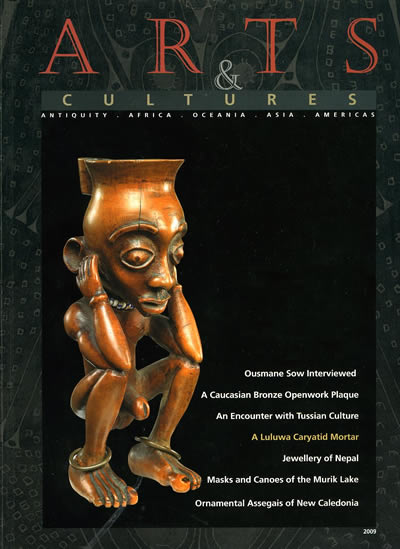